SEATTLE – MAY 16, 2018 – Lexcalibur, a fantasy poetry book from Penny Arcade’s Jerry Holkins and Mike Krahulik, is available today via the Penny Arcade site and at select bookstores.

In what little time they have between organizing the PAX events as well as writing and illustrating the highly successful Penny Arcade webcomic, Holkins and Krahulik poured their knowledge of the fantasy realms into a tome for the eyes of adventurers both young and old. Time spent with their Dungeons & Dragons party Acquisitions Incorporated, has born helpful fruit in the form of poems that contain both advice and hilarious tales of exploits.

Written by Holkins, some of the verses offer practical advice, such as whether or not it’s a good idea to have a vizier (don’t! They’re evil 110% of the time!). Others are more heartwarming, such as “Sword of My Fathers,” which speaks of the strength found in lineage and the stories that heirlooms can leave behind. For those who want advice from a dragon on just how lip-smackingly delicious a human can be, they’ll want to read “Kaliak Siir Tells it Like it is.”

Krahulik’s signature inkwork brings these fables to life. In “Guardian’s Lullaby,” a proud, weathered knight sings a fussy newborn to sleep, concern lined across his face. His rendition of a perhaps-cursed sword in “Doomblade” is as spooky as its name might suggest. Dragons, mimics, creatures with too many eyes – all are lovingly illustrated by one with a clear affection for fantasy’s favorite beasts.

Physical copies of Lexcalibur will be available in English for $20. An exclusive digital edition is available at Penny Arcade’s online store for $15.

“We’ve been working on this book of nerd-ass dungeon poetry for years,” said Jerry Holkins, co-founder of Penny Arcade. “We wanted a tome that adventurers like ourselves can read to their daughters and sons at night.” 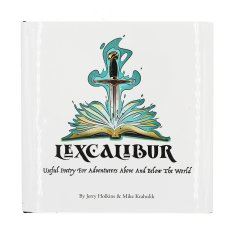 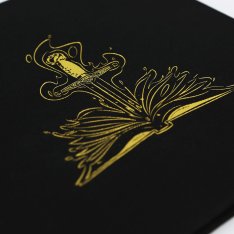 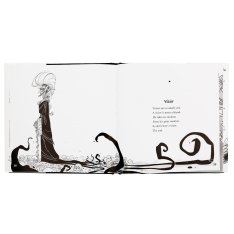 Penny Arcade is a webcomic focused on video games and video game culture, written by Jerry Holkins and illustrated by Mike Krahulik. With over 3.5 million readers, it is the most popular and longest running gaming web comic online. Penny Arcade is also responsible for the Child’s Play Charity, the Penny Arcade gaming expos (PAX) in Seattle, Boston, San Antonio, Philadelphia, and Melbourne, multiple videogames based on the brand, and multiple online video series.