“Hello and welcome back to the Aperture Science computer-aided enrichment center.”

For the last year we’ve been secretly working in our underground labs on the next iteration of the million-selling Bridge Constructor series. This new stand-alone title will release on PC, MacOS, Linux, mobile devices, and console, and fully embraces the Portal license, one of the most beloved video game franchises of the last decade.

Bridge Constructor Portal will blend the laws of structural engineering and technology straight from Aperture Laboratories into an exciting new game experience, all under the demanding gaze of GLaDOS.

Do you think we’re kidding? Here is undeniable scientific proof:

Bridge Constructor Portal will be released on December 20, 2017, for Windows, MacOS, and Linux as well as for mobile devices. The console versions will follow in early 2018.

“If you’ve been paying attention the solution should be obvious. As the case may be… good luck!” 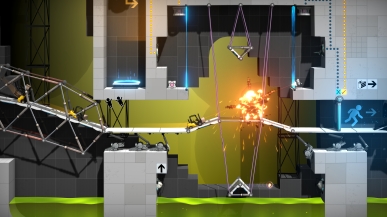 Valve is an entertainment software and technology company founded in 1996. In addition to creating several of the world’s most award-winning games, Valve is also a developer of leading-edge technologies including the Source® game engine and Steam®, the premier online gaming platform. More information at www.valvesoftware.com.

Headup Games is a hybrid games publishing and development company providing players worldwide with the best content in the independent gaming sector. Active on all major platforms such as consoles, mobile devices, and PC, the company has released over 100 titles since its establishment in 2009. With over 50 million customers served on mobile and further several million players on the PC and consoles, Headup Games is always looking to raise awareness and commercial success for developers thinking outside the box. More information can be found at www.headupgames.com.

ClockStone Software is an Austrian company specialized in game development across numerous platforms such as iOS, Android, PC, and Xbox One. Their many years of experience with the Unity 3D technology allows for state-of-the-art graphics as well as efficient product deployment to various mobile marketplaces. Their product range is multifaceted – from action role-playing to simulation and puzzle games. ClockStone published their mobile game hit “Bridge Constructor” on Android in 2012 and have since developed two also very well received successors with their publishing partner Headup Games. Please find more information at www.clockstone.com.