Romanian Developers’ Frank Take on Life in a Totalitarian State

Friday 9 June, London, UK: Tapping into the terror and oppression that’s the signature of life in a totalitarian state, Black The Fall’s puzzle-platform play has been capturing gamers’ attention since it was first unveiled in 2014. Now, almost three years on, Square Enix Collective is excited to reveal that Sand Sailor Studio’s debut title will launch on PC, PlayStation 4, and Xbox One on 11 July 2017.

Black The Fall’s visually striking environment charges players with solving a series of puzzles as they strive to survive in a world determined to keep them as nothing more than a cog in the wheel.

Taking charge as the game’s lead, ‘Black’, players must sneak through stages littered with cameras trained on their every move, and traps designed to take them down. The weapons of stealth and distraction are key to outsmarting the system.

“Black The Fall is an atmospheric platform puzzler that really taps into the idea of what it’s like to live in a communist dystopia,” offers Cristian Diaconescu, Creative Director at Sand Sailor Studio.

“We really wanted to use the puzzle genre to depict the kind of communism that dominated Eastern Europe in the decades after World War II – it really helps illustrate just what it was like to live within a restrictive regime. That means players have to make use of the kind of tactics people who survived that era mastered – manipulation and stealth – but this approach also bleeds into the melancholic atmosphere, rendered solely through image and sound. There’s no text or dialogue to tell the story, which we think also sets it apart.” 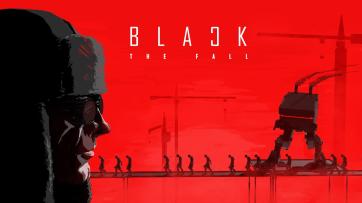 Life in Bucharest, Romania under Communist dictator Nicolae Ceaușescu in the 1960s, 1970s, and 1980s serves as a core inspiration for Sand Sailor Studio in the creation of Black The Fall, and helps the game truly stand out.

“We couldn’t pass up the opportunity to work with Sand Sailor Studio on Black The Fall,” details Phil Elliott, Director of Community & Indie Development at Square Enix Collective.  “Black’s journey isn’t just compelling because of the puzzle-based play the studio excels in, but also because of the sheer bleakness of the universe he inhabits. It’s a universe based on the real-life experiences of the families behind the studio – their story is Black’s story, in short. It all means Black The Fall is the kind of intentionally cold world we think gamers will conversely want to spend a lot of time within.”

Sand Sailor Studio is an independent game development studio founded in 2014 in Bucharest, Romania by two artists and passionate gamers: Cristian Diaconescu and Nicoleta Iordanescu. Currently, a team of eight, with backgrounds in working with Atari, Gameloft, Ubisoft and Activision, Sand Sailor Studio are developing Black The Fall. More on the team here: blackthefall.com/sand-sailor-studio

Square Enix Collective is an initiative that provides a range of non-restrictive services to independent developers to help them raise the profile of their projects, and bring them to market.

Creative control and IP rights are retained by the developers.