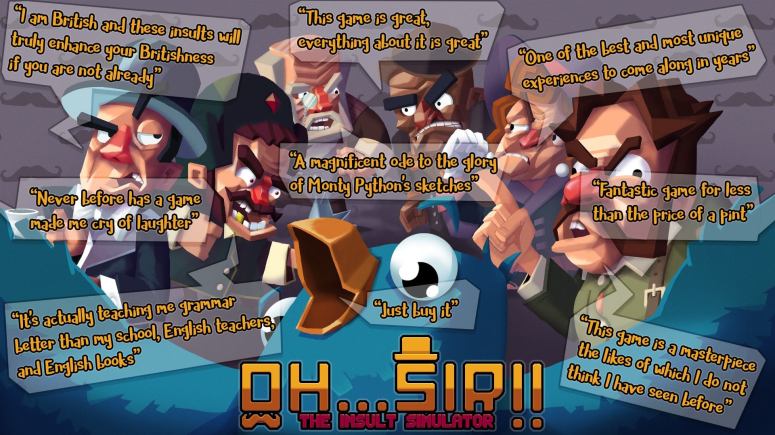 Rest that lazy bum and turn on your consoles as Vile Monarch has manufactured another brilliant way to hurl insults through the power of technology! That’s right, Oh…Sir! The Insult Simulator is coming to PS4 on May 30th, and Xbox One in June!

We’ve explored all of our inner insults, but for those who can’t wait we’ve channeled the cosmos to create an unmatched insult board. For reference, mine was “Your mother wanted to be a muppet!”; I’ve since notified my mother of this news.

Tune into the Vile Monarch’s Twitter this week for a smorgasbord of insults to celebrate the upcoming console launch!

Game Features:
– Loner’s Insult Tournament Mode: Battle your way through numerous unique situations and verbally assault your CPU
– Real-Life Friends Mode: Beleaguer your actual friends on a couch, ottoman, or whatever else you like to rest your fanny on
– Imaginary-Friends Mode: Verbally take down strangers from all over the “Online world”
– 10 Hilarious Playable Characters: Each with their own unique voices, quirky traits, and hilarious “insult components”
– 5 Conflict Scenarios: Lay down some verbal jujitsu across 5 different trying situations and environments- Contentious Battle System: Employ combos, criticals, continuations and other new mechanics to outwit your argumentative opponents!

Vile Monarch is a hard rock game studio created by two twisted minds: Kacper Kwiatkowski and Grzegorz Mazur, who catapulted from 11 bit studios where they had worked together on This War of Mine. Soon after he was born, the Monarch started using his exceptionally skillful minions to start making engaging video games for various platforms, full of surprising, novel ideas. And what’s worse, he forced them to have fun while working! All of it to – you wouldn’t guess – conquer the world! Vile Monarch lives in his castle in Warsaw, Poland. He likes rock music, beer, and the Mad Max: Fury Road movie.

Crunching Koalas is a small game development team based in Warsaw, Poland. After developing and publishing MouseCraft, an indie puzzler commonly described as a mix of Lemmings and Tetris, they decided to start helping other indies in getting their titles published on consoles. Recently worked on console versions of Oh… Sir! The Insult Simulator, BUTCHER, Lichtspeer, and Sky Force Anniversary.