1,378 Circuit Points On the Line Towards Brawlhalla World Championship

Over 4,000 participants have signed up across NA and EU regions to prove their valor in the biggest tournament this side of the Brawlhalla World Championship. Top players participating include the winner of the last Brawlhalla Circuit tournament, Boomie, and the highest standing EU player in the ranks, Sweden’s Maltimum.

Returning from the Brawlhalla Championship Series with commentary and analysis are Duc “DucXPham” Pham, Uyen-Anh “Whitesheepie” Dang, and Michael “Sparky878” Rahaim, who have been running community tournaments on their own since the early days of Brawlhalla’s closed beta.

“With all of our best players coming out to compete, I’m excited to see who is able to secure a spot at the invitational Brawlhalla World Championship in November,” said David “Foda” Kisich, Director of Esports, Blue Mammoth Games.

Interested players can still register here. The Top 16 and other select matches can be watched on the official Brawlhalla Twitch channel. 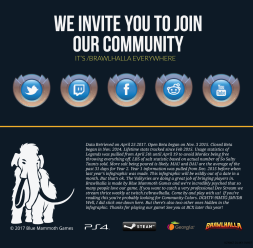