Hong Kong – April 18, 2017 – Eastasiasoft Limited, the independent developer and publisher of interactive entertainment, announced that Cursed Castilla EX, a 2D action platformer from publisher Abylight Studios and developer Locomalito, will launch exclusively in Asia as physical Limited Edition for the PlayStation®4 computer entertainment system in May 2017.

Players can look forward to an exquisite homage to the likes of various great 1980s classics in this highly acclaimed current retro video game. Cursed Castilla EX is the second release in the PS4™ Limited Edition series, published by eastasiasoft and available at Play-Asia.com. 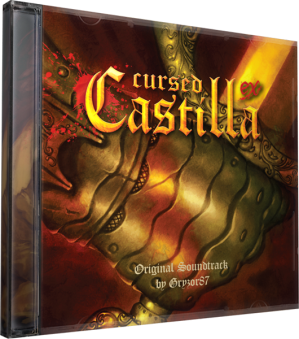 The tears of a young witch have been turned by a demon into a key that opens up a gateway for the evil in this world. The King Alfonso VI of León has gathered his loyal knights to get to Tolomera del Rey and finish the nightmare using the power of the Witch’s tears. Banish the zombies and demons that entered the Kingdom of Castile with Don Ramiro, the loyal King’s Knight, and his friends. For that, you will use a different range of weapons to defeat your enemies through the cursed lands of Tolomera, in a pure classic arcade action style.

Eastasiasoft Limited is an independent, Hong Kong–based developer and publisher of interactive entertainment specializing in video games and related media. Founded in 2007, eastasiasoft has worked on and published titles such as Rainbow Skies, Rainbow Moon, Lost Sea, and the Söldner-X franchise.

Abylight Studios is a digital entertainment company based in Barcelona. Initially focused on Nintendo platforms and smartphones, since 2015 Abylight strives for platform diversity and includes independent creators in its catalog. Their most recent project is Cursed Castilla (Maldita Castilla EX), a version of Locomalito’s classic retro arcade Maldita Castilla. For more information on Abylight Studios, visit their official website, Facebook, and follow @abylight on Twitter.

Locomalito shares background with many other kids from the 80s: he grew up playing arcade machines and dreaming about creating his own games. He had ideas and wanted to work on them with a passion. Years later, this vocation drove him to work on those ideas and shape them in his own spare time. His goal: creating video games with an old-school flavor – adventures that you could play on a straight run, created with pixel art and chiptune music and sound. For more information on Locomalito, visit their official website, and follow @Locomalito on Twitter.

Play-Asia.com was established in 2002 and is the leading independent retailer, providing outstanding customer experience, a large variety of genuine products, and global fulfillment.