BRISBANE, QUEENSLAND – March 8, 2017 – Yonder: The Cloud Catcher Chronicles, an open-world adventure across a beautiful island, will release on PlayStation 4 and PC on July 18, 2017.

Developed by Prideful Sloth, a veteran team of former Rocksteady developers and an Activision producer, Yonder‘s journey will follow a youth shipwrecked on the vibrant shores of Gemea, an expansive locale with eight different environments. Each location will offer its own wildlife and ecosystem, ranging from sunny sandy beaches to rolling grassy plains and steep snow-capped mountains.

Despite its lush climates, the isle and its kind-hearted inhabitants are enshrouded by an evil fog slowly destroying paradise. By supporting residents through talents including fishing, farming, crafting, brewing, and cooking, adventurers will build relationships with the locals and earn help with their journey to restore Gemea. 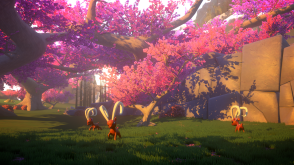 As the stranded protagonist traverses the island and contributes to its communities through quests, they will uncover Gemea’s secrets and become its champion. The hero will work with citizens to save the land and its people, while also uncovering their own mysterious past.

“Yonder‘s gorgeous and immersive fantasy world will send players on an epic quest to revitalize a troubled land,” says Cheryl Vance, co-founder and lead designer, Prideful Sloth, “With an inviting atmosphere, a massive open-world to explore and a wealth of mystery, Yonder will provide countless hours of entertainment.”