Fans who pre-order the game will receive an exclusive six-page comic book penned by renowned comic artist Enrique Fernandez or an exclusive artbook featuring unseen images and concepts from the game’s development. The physical version of the game will also include a CD of the official soundtrack and a full-colour manual on the game and development background.

Developed over three years between Cavalier Game Studios and Tequila Works, The Sexy Brutale is the name of the grand casino mansion where a series of horrifying murders take place during the annual masked ball. Players take on the role of elderly priest Lafcadio Boone, and must hide and spy on guests and staff alike to solve and prevent each murder before the clock strikes midnight — during a never-ending Groundhog Day that will not stop until all the mansion’s dark secrets are revealed.

“The Sexy Brutale is one of the most remarkable games we have seen, and we’re absolutely delighted to be bringing it to physical retail,” says BadLand Games CEO Luis Quintans. “Solving murders by reliving an unending cycle of death is a great concept on its own — and a worthy addition to the adventure genre.”

“The joy of The Sexy Brutale is experiencing each individual story and death and learning how to prevent each murder before it happens every day,” says Tequila Works CEO and creative director Raúl Rubio. “Such a special occasion demands the appropriate dress code — a fancy physical release in partnership with BadLand Games!”

Pre-order items are retailer dependent and will be either a unique comic book by Enrique Fernandez OR an exclusive game artbook. Further details to be announced.

The Sexy Brutale will arrive as a physical release on PlayStation 4 on April 11th, 2017.  Digital releases for PS4, XB1, and Steam are also in the works. 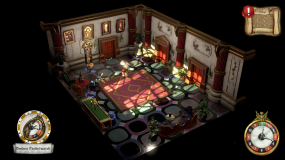 Tequila Works, S.L. is an independent boutique studio founded in 2009 by Raúl Rubio Munárriz (founding member of MercurySteam Entertainment, developers of Castlevania: Lords of Shadow) and Luz María Sancho. In addition to The Sexy Brutale, the studio developed RiME and Deadlight (which was nominated for a BAFTA and was published in 2012 by Microsoft Studios). For more information about Tequila Works and The Sexy Brutale, please visit www.tequilaworks.com and http://www.thesexybrutalegame.com.

Based in Madrid, Spain and established in 2011, BadLand Games is an independent company specialising in the physical distribution and global publishing of video games. In Spain, BadLand Games is the official distributor of AAA titles for all platforms including, Minecraft: Story Mode, La Voz, Sniper Elite 4 and the popular Darksiders Warmastered Edition. BadLand Games is also the publisher of indie titles such as:  Anima: Gate of Memories, Heart & Slash, Dex, Castles, Dead Synchronicity: Tomorrow Comes Today, Ginger: Beyond the Crystal, BOOR, Vostok Inc, Velocity 2X: Critical Mass Edition and the in-house developed game, Awe. To learn more about BadLand Games, please visit:  http://badlandgames.com.