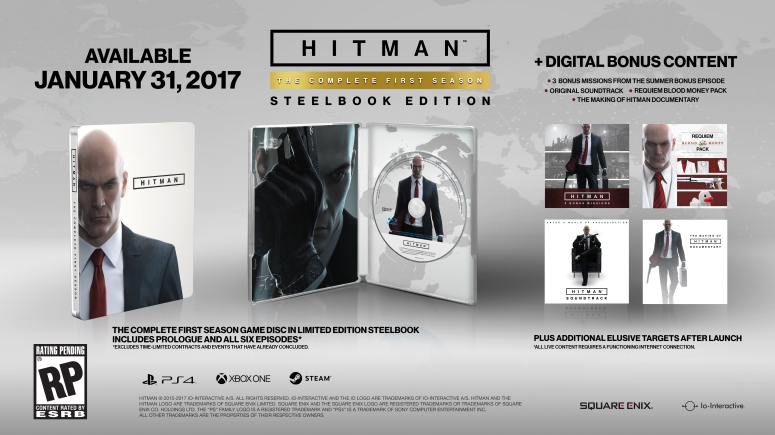 COPENHAGEN, January 31, 2017 – HITMAN – The Complete First Season is available on disc from today.

HITMAN – The Complete First Season will be released in a day one SteelBook edition. The Complete First Season includes all of the locations and episodes from Season One; the Prologue, France, Italy, Morocco, Thailand, USA and Japan. In addition, all of the Escalation Contracts, Challenges, Opportunities and Contracts that have been created by our community will be included as well as the opportunity to take on all upcoming Elusive Targets that take place from now onwards.

“This is the culmination of quite a journey, everything we’ve learnt, refined and updated over the live season has gone into the disc release,” said Christian Elverdam, Creative Director, Io-Interactive. “Our vision was to create this World of Assassination and refine it with the help of our players, and for anyone who wanted the game on a disc this is a highly polished, globally acclaimed game with over 100 hours of gameplay and more live content to come, so no more waiting needed.”

Become the Master Assassin in this intense spy-thriller story. As Agent 47 you perform contract hits on powerful, high-profile targets in exotic locations around the world, in this creative stealth action game. Gameplay focuses on taking out targets in huge and intricate sandbox levels with complete freedom of approach. Where to go, when to strike and who to kill – it is all up to you.

About HITMAN™ – HITMAN is the sixth game in the blockbuster series and is the culmination of a journey started by Io-Interactive more than 17 years ago. It builds on the critically acclaimed and commercially successful foundation of games like Silent Assassin, Blood Money and the recent Hitman: Absolution.

About Io-Interactive – Io-Interactive, a Square Enix Studio, is the creative force behind some of the most talked-about multiplatform videogames to emerge in the last decade. Starting with the praised and ground-breaking Hitman series, Io-Interactive has since developed the cult classic “Freedom Fighters”, the controversial “Kane & Lynch” series and the adorable “Mini-Ninjas”. Dedication to creating original IP and unforgettable characters and experiences are the hallmarks of Io-Interactive.

More information on Square Enix, Inc. can be found at http://www.na.square-enix.com.