SANTA ANA, Calif., January 13, 2017—Continuing to expand the audience for its runaway hit, Nicalis Inc. today announces that The Binding of Isaac: Afterbirth+ is coming to the Nintendo Switch in Spring 2017 at retail and digitally via the Nintendo eShop. It’s the definitive edition of one of the most popular video games of the 21st century.

For the uninitiated, The Binding of Isaac: Afterbirth+ is a top-view multiplayer twin-stick shoot-’em-up bloodbath. The most celebrated creation of internationally acclaimed game designer Edmund McMillen. The Binding of Isaac: Afterbirth+ features randomly generated dungeons, ensuring an infinitely replayable adventure in which every new gameplay session is different from the last. With the Nintendo Switch version, players can venture into Isaac’s basement on the big screen or the game on the road for portable play.

“The Nintendo Switch launch line-up isn’t complete without Isaac,” says Nicalis founder and president Tyrone Rodriguez. “The Binding of Isaac: Afterbirth+ is the definitive ‘day one’ purchase for any players who want a Nintendo Switch.”

Contributing to the deep, dark and frequently disturbing insanity of the complete Isaac experience, The Binding of Isaac: Afterbirth+ includes over 500 different items and weapons—many of which grant special powers and synergized attack combinations—scattered throughout more than 6,000 terrifying rooms. You’ll need as many as you can find if you expect to conquer the game’s 50+ unique bosses, complete more than 30 challenge modes and see all of the 20 different endings that equal over 4 billion possible gameplay combinations. 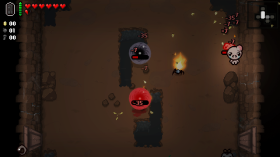 About Nicalis, Inc.
Based in Southern California and founded in 2007, Nicalis, Inc. is an independent developer and publisher with a proven track record that includes well-polished games like Cave Story, 1001 Spikes, Creepy Castle and Ittle Dew 2.