Announced today Yooka-Laylee will launch on April 11th 2017 for PC, Xbox One and PlayStation 4 platforms, Yooka-Laylee is now available to pre-order at £34.99 / $39.99 / €39.99 for non-Kickstarter backers in both digital and physical formats* from all participating stores worldwide. Kickstarter backers will soon have the option to upgrade to a physical version if they choose. The pre-order offer includes an instant unlock to the Yooka-Laylee Toybox  which gives a taste of the platforming mechanics set to appear in the full game in a self-contained, spoiler free sandbox experience.

Playtonic has also provided an update on the Wii U™ version of Yooka-Laylee, confirming that development is looking to transfer to the upcoming Nintendo Switch™ platform.

“We’re sad to announce that despite our best efforts and exploring every possible avenue, we have encountered unforseen technical issues that unfortunately mean it will be impossible for us to release Yooka-Laylee on Wii U as initially planned.” Gavin Price, Studio Director, Playtonic Games confirmed.

“We can however confirm today that we are working very closely with Nintendo to look to bring Yooka-Laylee to the upcoming Nintendo Switch™. We’re thrilled to be able to explore the opportunity and more details will be shared in early 2017. Of course, any backers who pledged for the Wii U version will be able to move their pledge to any of the versions launching on April 11th or upgrade to the Nintendo Switch™ version when we announce further details in 2017. Thanks again for your incredible support.”

Playtonic and Team17 also revealed today a brand-new world for the tail-twirling buddy-duo to explore: Capital Cashino. As with all the five worlds in Yooka-Laylee, this visually striking new world will be fully expandable, providing players with a whole new area to explore and challenges to complete, with an exciting gameplay twist; players must now compete to win casino tokens, and exchange them with the banker for pivotal Pagies!

Yooka-Laylee is now available to pre-order digitally for Xbox One via the Xbox Store, PlayStation 4 via the PlayStation Store and for PC, Mac or Linux via both Steam and GOG.

More information for the Kickstarter backers on upgrading pledges to a physical boxed version or exchanging from the Wii U to another platform will be available soon. For updates please stay tuned to the official Playtonic blog.

Yooka-Laylee launches on Xbox One, PlayStation 4, PC, Mac and Linux on the 11th April 2017. Further details to follow for Nintendo Switch™.

*Note: Boxed, physical version available on Xbox One and PlayStation 4 only. 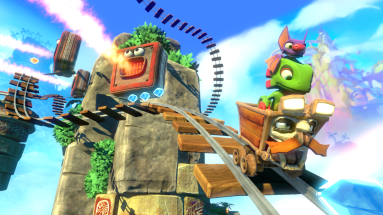 About Team17 Digital Ltd
Founded in 1990, Team17 Digital Limited is a leading international games label that hosts the Worms franchise, Yooka-Laylee, The Escapists, Overcooked, Way to the Woods and many more from amazing developers around the world. Visit www.team17.com for more info.

About Playtonic Games
Founded in 2014, Playtonic Games is an independent developer based in Derby, UK. Between them, the Playtonic team has over 100 years of combined experience working on legendary gaming franchises and is currently developing the much-anticipated 3D platformer Yooka-Laylee.