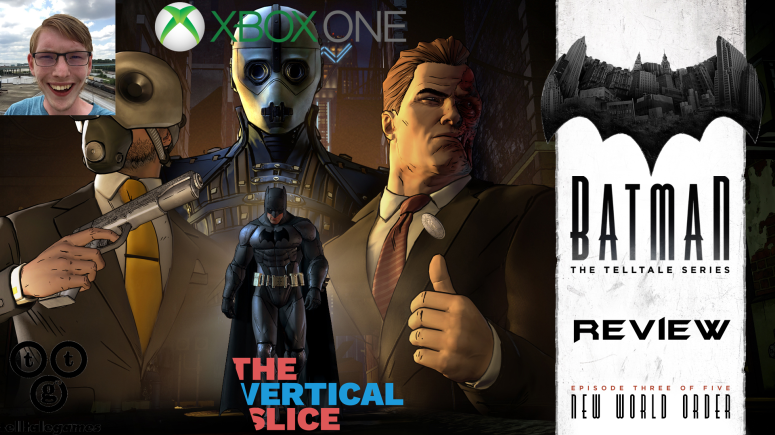 Bruce Wayne has lost it all – his money, his company, his friends. All gone. Telltale Games offers this brutal scenario up to you in New World Order, the middle chapter of Batman – The Telltale Series. Soon after the opening credits rolls, Bruce is hit with a freight train of destruction, and that slow downward spiral is what this episode relishes in. There’s not a whole lot of action-heavy scenes here and the auditory gasps are kept to a relative minimum, leaving much of this episode’s story to just sitting down with Bruce and getting to know what makes him tick, and may go down as one of Telltale’s greater third Episodes.

At the center of Bruce’s recent troubles are none other than the mysterious terrorist group, The Children of Arkham. Up to this point, we still aren’t clear as to what their intentions are for Gotham and why Bruce is at the center of it all – all we know is Lady Arkham wants Bruce to pay for the sins of his father, so to speak. There’s no way out this time – Bruce Wayne will have to pay for what his father did so many decades before.

Seeing a comic book icon such as Batman get beaten to a pulp is a great thing to bear witness t0, but in a narrative so powerful, you also need to time to breathe and you’ll receive none here. As soon as one beatdown occurs, it’s time for another and another, to the point where the beatdown becomes more and more muted as the Episode goes along. A prime example of this is when you go straight from saving Gordon to trying to “save” Harvey Dent. It’s that “illusion of choice” again, because no matter how much you try to help Harvey, he’ll become a villain you have to face off against. Why? Because the plot demands it! That’s why!

However, I did enjoy the loosely-dangling thread of Harvey’s horrific version of Batman. It’s an interesting take on the Bruce/Harvey relationship we rarely see, at least, not outside comic books. Just don’t read too much into that, because there’s no way Bruce is hanging up the cowl anytime soon.

One of the nicer moments in this Episode is a romantic encounter between Bruce and Selina. Well, if you choose to, of course. C’mon, though, Catwoman is the perfect woman for Bruce. Sure, the animatics and animations are nothing short of awkward and gross, the emotional impact, as a comic book fan was nice to see in a video game.

Aside from Telltale’s usual “I don’t want to fight, but you’re making me” scene, New World Order is light on the Bat-beatings, with subtle hints about what may happen to our Caped Crusader in Guardian of Gotham. It ends on one amazing cliffhanger with huge reveals that are sure to have you talking for weeks after finishing it. The twist was a grand one that I genuinely have to applaud Telltale for. Good job.

Batman – The Telltale Series – Episode 3: New World Order is available now on Mac, PC for $24.99, or iOS, Android, PlayStation 3, PlayStation 4, Xbox 360, and Xbox One for $4.99 for Episode 1 and $19.99 for the Season Pass. A copy of the Season Pass was generously sent to use from our friends over at Telltale Games.