Rise & Shine Launches January 13 on PC and Xbox One

December 9, 2016 – Vulnerability stacks, debuffs, and death rates are multiplying. Ever since the awful space grunts of Nexgen attacked Gamearth, the video game world took a turn for the worse. But Rise and his talking gun Shine have it on their minds to restore Gamearth to its prior-save-state glory―no matter how many respawns it takes.

Combining elements of arcade shooters, bullet hells, and puzzle-platformers, Rise & Shine is a skill-testing tribute to everything we love about video games, injected with just the right amount of humor.

To save Gamearth, Rise must work closely with his new partner Shine, whose add-ons, special bullets, and loud-mouthing are key to getting them both safely across each meticulously hand-drawn level. Pack your strategy and timing enhancing gear, and get ready to repel the Nexgen invaders to bring the fun back to Gamearth!

Add Rise & Shine to your wishlist on Steam: http://store.steampowered.com/app/347290/ 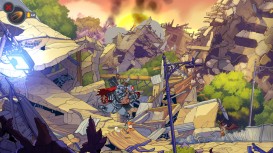 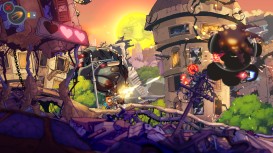 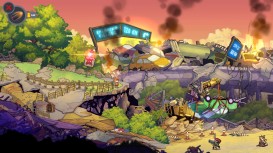 About Adult Swim Games
Adult Swim Games oversees the production, publishing, and marketing of original games created by independent developers from around the world. With more than 200 games across PC, mobile, web, console and VR, Adult Swim Games’ unique offerings have received numerous industry accolades — including four #1 rankings in the App Store and a finalist for the Seumas McNally Grand Prize at IGF. Popular titles include Robot Unicorn Attack, Pocket Mortys, Duck Game, and the upcoming Toejam & Earl: Back in the Groove.