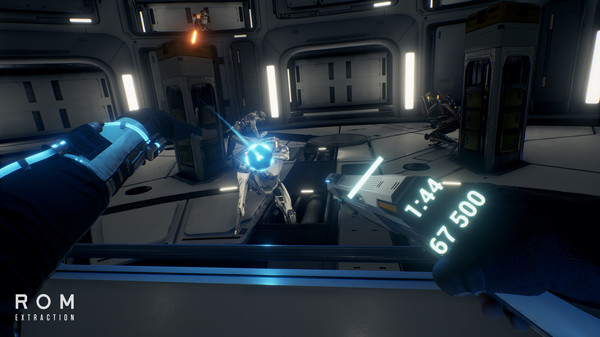 SANTA MONICA, Calif. – Dec. 1, 2016 – First Contact Entertainment, the new studio formed by a team of virtual reality and AAA game development veterans, has announced its sci-fi action shooter VR title ROM: Extraction will be released on Steam for HTC Vive on December 7, 2016, and will come to the Oculus Store for Oculus Rift soon after. A new trailer has been released in celebration!

ROM: Extraction is a pick-up-and-play, addictive classic arcade shooter, built natively for VR. The heart of the gameplay mechanic is “Throw, Slow & Shoot.” Players will defend themselves against extraterrestrial robots by using the power to slow down time – called “Reflex” power -for an unprecedented style of strategic combat. The game features the first-person immersion of VR, intuitive, motion-based controls, multiple difficulty settings and global and local leaderboards.

The game’s initial release is just the beginning, with a full DLC plan that will unveil the ROM universe. Players can expect cooperative multiplayer, new levels, enemies, weapons, power-ups and more.

The ROM: Extraction Steam Store page can be visited here.

First Contact Entertainment is a new studio focused on creating VR games and experiences with the highest production values. Drawing from experience building some of the most innovative VR games, the company’s mission is to become the top independent AAA VR game development team in the industry.