Mordheim: City of the Damned arrives on PlayStation 4 and Xbox One onOctober 18th 2016!

After seducing a large number of players on PC with its brutal and tactical gameplay, Mordheim: City of the Damned is coming for download on PlayStation 4 and Xbox One on the 18th of October. Mordheim: City of the Damned, the first video game adaptation of Games Workshop’s cult classic, is a turn-based tactical game in which you lead your Warband into bloody and lethal skirmishes. The game blends RPG elements, fast-paced tactical combat and intricate unit customization in a time wrought by chaos and rivalry where only the strongest survive.

Mordheim: City of the Damned takes place during a grim conflict where factions, empires, and mercenaries fight for gems, called Wyrdstone, created by a comet impact that destroyed the depraved city of Mordheim. It will be your responsibility, amidst this chaos, to take command of your Warband and storm the ruins to battle other parties, avoid abominable monsters, and gather Wyrdstone. Each nail-biting decision has its consequences: Permanent death or crippling injury that could leave your recruits without a limb or an eye.

The game includes a full campaign for each of the four Warbands: The Human Mercenaries, the Sisters of Sigmar, the Skaven of Clan Eshin, and the Cult of the Possessed. Once you feel ready, you can also enlist your single-player Warband to compete in online multiplayer skirmishes!

Battle for honor and glory in Mordheim: The City of the Damned, coming to consoles on the 18th of October 2016!

About Mordheim: City of the Damned

Mordheim: City of the Damned is the first video game adaptation of Games Workshop’s cult classic Mordheim. Set in the Warhammer world’s decimated Empire city, Mordheim: City of the Damned is a turn-based tactical game where you lead warbands into bloody and lethal skirmishes. The game blends RPG elements, fast-paced tactical combat and intricate unit customization in a time wrought by chaos and rivalry where only the strongest survive.
Pick your warbands from iconic Mordheim factions – Sisters of Sigmar, Possessed, Skaven, Mercenaries from the Empire – and lead your troops to battle. Recruit new units, equip them with enhanced gear. Evolve and customize your Warband with the experience gained from each successful mission, transforming them into a terrifying force on the battlefield.
Devise the best strategy to annihilate your rivals. If you fail, some of your units might lose a limb… or worse. Keep in mind that in Mordheim: City of the Damned, a dead unit is lost forever! Consider the environment when formulating your battle strategy, exploiting the unique buildings, ruins or the layout of the streets. Deploy your troops carefully and anticipate the actions of your adversaries to set up ambushes! Organize ingenious battle plans where the talents of your units will be as important as your own luck during key moments of combat.
In these epic battles where fame and glory await, your strategy will definitely be your best ally! Visit the four corners of the City of the Damned to complete multiple missions in the solo campaign, or challenge other players in enthralling multiplayer modes. 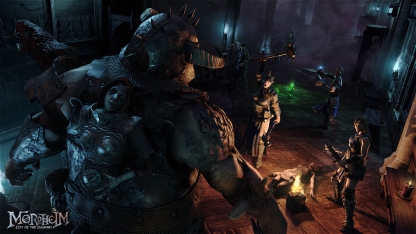 About Rogue Factor
Located in Montreal, Canada, Rogue Factor is an independent video game development studio created in 2013 by a team of industry veterans. Focused on making high-quality and innovative games, its first project is Mordheim: City of the Damned, a tactical game taking place in the famous Warhammer world from Games Workshop.
If you want to learn more about Rogue Factor, you can learn all kinds of stuff about us on our official website:  http://www.rogue-factor.com/

About Focus Home Interactive
Focus Home Interactive is a French publisher based in Paris, France. Known for the quality, diversity and originality of its catalogue, Focus has published and distributed original titles that have become benchmark titles worldwide, available both in store and for download across the world. Focus publishes games on all major platforms, consoles and PC. The publisher’s catalogue will get even richer the coming months and years with eagerly awaited games such as Vampyr, The Surge, Mordheim, Space Hulk: Deathwing, Call of Cthulhu – the official video game, and many more.
More information about the company at:  http://www.focus-home.com