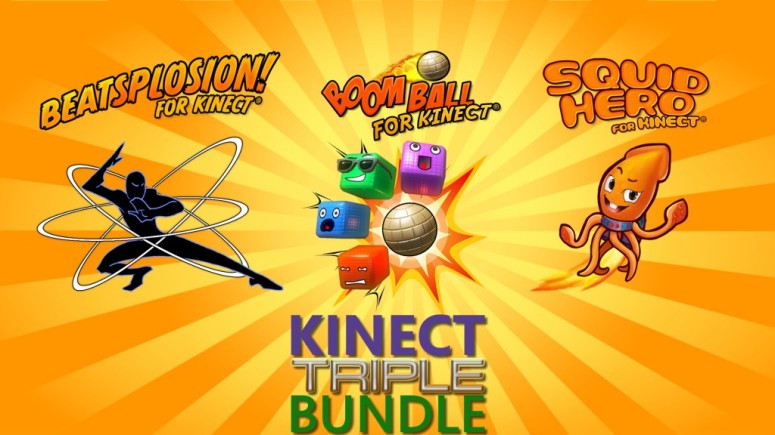 This limited time package is only available from September the 26th and ends on October the 10th, after which the bundle will no longer be available, so this is your only chance to pick up this fantastic package.

Virtual Air Guitar Company’s entry to Xbox One and self-publishing on ID@Xbox began its life as a finger-controlled game for the Leap Motion Controller. After a graphics upgrade and a complete overhaul of the gameplay to better fit the physical full-body control of Kinect, Boom Ball for Kinect had become a completely new game, even though the core idea of hitting bricks with a ball had remained the same.

Squid Hero saves the planet from a new ice age in this cheery and colorful adventure for all ages, using the power of Kinect to smash thousands of encroaching chunks of ice.

Our previous game Boom Ball had been loosely based on Breakout and Pong. When we began prototyping our next project, one of the ideas was to see what we could do with Asteroids. Instead of shooting at rocks, you’d grab them with your hands and throw them against each other. The first prototype had some vaguely rock-like gray blobs on a default blue background. They looked kind of like icebergs floating in an ocean… then the water theme sparked off, and suddenly we had a squid and little critters trapped in ice cubes. The rest evolved from there.

Beatsplosion uses Kinect for Xbox One to transport players into the crazy world of subatomic particles in search of a Unified Field Theory – by smashing everything into smithereens. Players will punch particles, dodge walls and jump over obstacles, all to the beat of music.

Beatsplosion started out as a game about smashing stuff. Because, well, who doesn’t like smashing stuff? The first key idea was to have satisfying physical reactions. When you hit a crystal pillar, it ‘splodes into tiny fragments that fly out based on your hand’s motion – upward, downward, forward, any direction you like. The harder you hit, the more they scatter! Every punch is unique, every crystal responds exactly to your hits. The next step was adding music so you weren’t just punching randomly, you were doing it in time to a beat. At higher tempos, things started to get rather sweat-inducing. That’s when it all clicked together: a rhythm game about smashing stuff where you get a great workout almost by accident. And did we mention the smashing yet?