King Oddball is a game that’s been out on seemingly everything under the sun:  iOS, PS4, Blackberry, hell, I think even some refrigerators have it to play while you wait for the ice cubes to pour.  Now, it’s finally releasing on the last 2 heavy hitters, the Xbox One and Steam.  As a self-confessed fan of 10tons games, I was eagerly awaiting the XB1 version.  I don’t know why it took so long to come, but that matters not now.  It’s here, and it’s glorious.

It’s no secret that this game is targeted at casual or mobile gamers, but don’t let that deter you if you fancy yourself a hardcore enthusiast.  King Oddball may be easy and simple to play, but it can be tough to master.

Like Tennis to the Face and Baseball Riot, the way you work your way through the levels is on a box grid.  You can choose whatever level you want as long as you’ve beaten the one that connects to it.  This system works well because it doesn’t force you to necessarily say stuck on a single level should you encounter trouble. You can feasibly pick from a few every time if you set it up right.  Once you knock off the entire square, the next one opens up, offering tougher levels and a level specific challenge or menu (a stats screen or 1 rock mode for example).  It caters to the mobile audience, but it still works well on consoles, and I very much enjoy it.

Now the object of the game is pretty straight forward – you play as the King and you toss rocks at the army that’s trying to stop you from ending the world.  With your tongue.  The King is a floating rock-like  head with a crown, and his tongue is his slingshot.  Almost like Angry Birds, but in a different form.  Think of it as Katamari Damacy’s King of All Cosmos meets Angry Birds and you’ll have a good idea of what to expect in my opinion.  I guess I have a thing for weird kings…

There’s only 1 button to use in the game, and you don’t even move the tongue to toss the rocks, KO (not this KO) does it himself.  You just need to make sure that you line it up correctly using the momentum to destroy whatever you’re aiming at.  It’s wicked simple, but it can be a tough thing to get down without playing a level more than a dozen times, just like most games of this ilk.  That’s not a bad thing, either.  And thanks to the quick restart via a button press, you can jump right back into the level in the blink of an eye if you already know that your first toss set you up for failure.  Quick load times all around help this game run as smoothly as you’d want.

When it comes to the graphical prowess of Senior Oddball, there’s nothing to make anyone jump for joy.  This was clearly a mobile game bumped up in fidelity for a more powerful system.  However, that doesn’t mean the game looks bad, in fact, it looks really nice.  The colors pop and I really enjoyed the grainy filter that plays over the levels.  Maybe that was to mask the aforementioned mobile-ness of it, but whatever, because I think it benefitted the experience.  The game is already weird, and that just helped it out.  Even the backgrounds look nice, and sometimes they house a cute little animal or two.

The physics on the rock tossing can be spotty sometimes, but overall, I think it works pretty well.  Sure, the thousands of tosses I made didn’t always hit home (and there’s that stats page for you to look over!!), but I never got frustrated enough to want to put the game down.  Like previous games I mentioned earlier, I just wanted to keep going.  I consistently changed my time frame for playing with the “just one more level” or “I’ll stop once I do this” and to me, that makes these kinds of games such a worthy addition to my collection.

In fact, the only area I really can fault the game is in the music department.  At first, the music is really catchy, but since it basically plays the same song the entire game, it gets old and annoying pretty quickly.  More variation would have helped, but, hey, no game is perfect.  This is one of those games I love to play while watching Netflix or YouTube on the computer while looking to set high scores or wind down at the end of a tough day.

The Achievements in the game are of typical 10tons flair, with some taking plenty of practice to unlock.  Nothing should be too hard, but you may put in some time for a few of them.  That’s A-OK with me.  My only complaint with these is there’s never enough to unlock!!  I NEED MORE!!  Guys, I’ll accept an update of just new Achievements to strive for, they don’t even have to come with new levels (though who wouldn’t want more?  Even the seasonal stuff from mobile would be cool.).  I’ll even help kickstart the cost of doing it.  I have a TMNT piggy bank with $11 in it, mostly dimes and pennies.  That should be enough to get the rock rolling, right?

And once you’re done with the main world, you can search around to unlock a secret Mustache World that offers even more rock tossing action where KO drops the crown and grows a nice caterpillar on his face becoming a dapper, mustachioed floating head.  There’re well over 100 levels, so trust me when I say, you won’t be short on action.  Hell, there’s even a way to kill the King by accident (or on purpose…)

I’m really happy the devs finally got the game out to Steam and Xbox for players on those platforms to enjoy more of their signature fun.  I hope we get more of  these kinds of games and that we don’t all have to wait for everyone to get a shot at them.  Even if we have to, they’ll be worth the wait if they’re to this quality.  For the price, unless you have some sort of crazy bias against casual games, there’s no reason to let this one stay out of your library.  You’ll be glad you have it.  King Oddball is a blast and you should be playing it right now.

King Oddball is available now on Xbox One and Steam for $4.99 (with a 10% discount for the launch week).  It’s also available on pretty much everything else, so go search your favorite platform’s store to find it!!  A copy of the game was graciously provided by our friends at 10tons for the purpose of this review.

The game uses the same level system as some of my favorite 10tons games.  It works, so why change it? 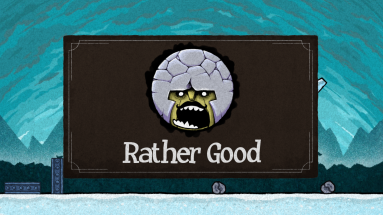 These imposter Kings are bouncy balls and can either help you out or destroy your chance at advancing.