“A computer would deserve to be call intelligent if it could deceive a human into believing that it  was human.”   –   Alan Turing

Far be it for me to understand intelligence at the level that scientists, astronauts, doctors, lawyers, inventors, and any other learned person on this planet (or off) have achieved throughout their lifetime.  Now, don’t get me wrong.  I don’t think I’m dumb.  In fact, even though I routinely put myself down in the brains department I actually know that I’m a reasonably intelligent guy.  Those who know me well enough can corroborate that fact.  It’s just not as fun or funny to brag about being smart.  I find more pleasure in doing the opposite.  However, I do not pretend to be as smart as those mentioned above.  The ones who can do what those guys can do and do it so well, to be confident in their abilities, to put themselves in sometimes impossible situations and come out on top.  Sometimes I can barely brush my teeth without getting toothpaste in my eye.

So I can tell you with satisfaction that after completing The Turing Test, I felt like I earned it.  I felt smart.  Again, not scientist smart, but enough to where I was happy with what I accomplished.  Normally that never crosses my mind when I complete a puzzle game, but with the focus on AI vs. Human intelligence in this one, it was always staring me in the face.  So with that, it was hard to keep that out of my mind, especially because I was constantly thinking about it.  The actual Turing Test theory is a hotly debated one, and as such, I can’t even begin to explain where I stand on the issue.  It’s also very intricate, so if you are interested in that sort of thing, I definitely recommend looking it up.  You’ll have a nice rabbit hole to go down.

The story played out in The Turing Test isn’t really a new one, but how it comes to the way it tells it is pretty distinct in my mind.  You play as Ava Turing, an astronaut that gets woken up early from cryosleep in order to solve a major problem.  Now, I’m not going to explain any more of the story than that because I believe that going in and knowing very little helps the narrative out greatly.

One of the first things that I noticed, or felt, really, was that this feels like a serious version of Portal.  I’m sure everyone and their mother who’s reviewing this game will say the same thing, but that’s because it’s true.  You don’t use portals in this game, but you do use energy in the same basic ways, so if you’re familiar with how Portal presents itself and plays, you’ll be right at home solving these “test chambers” all day.

Even though the setting of The Turing Test has you inside a sterile-looking space station for the vast majority of the game, it still manages to look pretty.  Perhaps it’s due to not having much to render aside from the same assets over and over.  I don’t know, as I said, I’m not some kind of scientist, but at the same time, I don’t care why.  I care what the outcome is and here it’s really nice.  It feels like what I imagine a space station to look like (within reason, of course), and the way it manages to alter the visuals at certain points of the story to set the proper tone is welcomed.  Even the use of particle effects, though sparingly, are done to great effect here.

A highlight of the experience is the voice acting.  All around it’s of really high quality, and with one specific character, because the performance is done so well, I felt torn on where I should be siding and how I felt about them.  This character was a big highlight for me, and I wish there was more back and forth between Ava and them during each test, rather than the few lines each time you entered a new room.  That’s the biggest issue I had with the script – there wasn’t enough of it for my liking.  I dug so much of the back and forth between you and them, but it felt so weird to have a few lines and then nothing throughout the whole puzzle until you make it to the next room.  Especially because of something that’s said halfway through the game.

Musically, there’s a nice score throughout the game, and one of the first songs you hear made me uneasy every time a specific section was played of it.  Uneasy and daunting in a good way, like something was going to just jump out at me or it was building to a scare I wasn’t ever going to be ready for.  The issues I have with the music, though , would be that there were times that I was tired of hearing the same piece over and over again and also that many times the music would just suddenly cut out.  Not like a glitch or anything, it’s just how the sound design was implemented.  The sound effects worked well, too.  I loved hearing the energy being passed back and forth.

The goal of the game is to solve puzzles that seemingly only you, a human, can solve.  The station has been set up in such a way that, assumedly, only you can pass it all and make it to the end.  You’ll swap energy balls back and forth to open doors and power switches, take energy boxes and maneuver them in specific ways throughout the tests, and even take short breaks to take in the interesting “side story” should you choose to learn more about what’s really going on millions of miles away from Earth.

Since the point is to solve puzzles that require thinking a computer shouldn’t be able to do, you’ll need to use more than just logic to power on through.  Thinking outside the box can help you overcome something that you may be thinking way too clinical on.  But because everything is set up in such a way that 90% of the areas are puzzles, it can make the whole station feel kind of barren.  It’s not a major flaw by any means, but it does make you wonder where everything went and how these tests were set up in such a way to make the areas look naturally like a test chamber.  I guess I’m overthinking it, but, certain lines of dialogue stick out like sore thumbs when it comes to certain things to me.

The physics in the game are generally pretty good, but there were times I definitely struggled because picking up a box didn’t register properly.  There’s rarely any timed elements to the puzzles, so it’s not like it hindered in that sense, it just became an annoyance sometimes that you had to be so precise with your cursor.  Other annoyances were the long load times and poor frame rate.  The load times I can kind of look past, but the frame rate is something that was so constant that it was always noticeable.  Whether it be complete stops or well below 30 fps, I never had to be looking for an issue, it was always going to find me.  Now, because this isn’t a twitch shooter or something that lives or dies on perfect frame rate, it didn’t completely ruin the game.  Ruin may be too strong a word.  The low frames were something you could see without trying, and that will bother some people.  It didn’t hinder my ability to solve the puzzles, so, it’s more of a big annoyance than a game changer.

If you’re looking to get 100% in the Achievements department, it’s certainly doable.  About half are just making it to the end of the game and the other half are completing the optional puzzles in each section of the station.  The good news is that even if you don’t do them initially, you can go to a chapter select and finish them after the main story.  Some of the main story puzzles are super simple, while others make you think.  The optional puzzles lean more towards the latter, so put on your thinking caps if  you’re looking to do those without cheating.

I had a tough time with the way I wanted to score this.  I went back and forth between 2 grades but ultimately, I’m going with the higher choice.  Yes, there were some low points in the experience, but as a whole, the narrative and interesting puzzles overshadowed the problems I faced enough to allow me to overlook them enough.  And, while I didn’t fall in love with the ending (though I suspect there may be an alternate one), it didn’t detract from the overall point it was making.  This is a very worthy puzzle game, and if you’re someone who enjoys the genre, I wouldn’t recommend ignoring The Turing Test for long.

The Turing Test is available now on Xbox One and Steam for $19.99.  A copy of the game was generously provided by PR firm Kartridge for the purpose of this review. 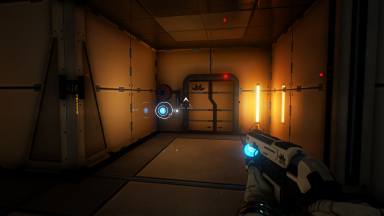 Oh, how it must feel to be alone in space. But, are you really alone if you have a computer to converse with? 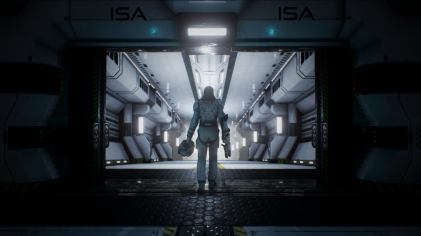 It wouldn’t be a first person game without a gun, right? 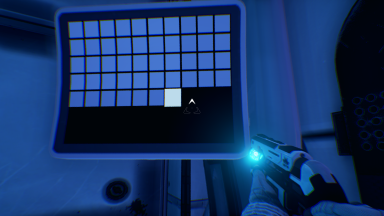 Even though you’re inside 98% of the time, the outside setting plays a major role in the story. OK. I lied earlier, but this time I’m being serious. No more story stuff. 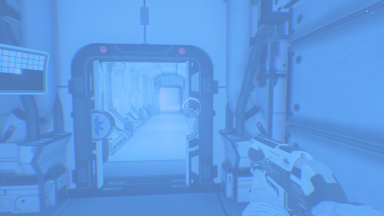 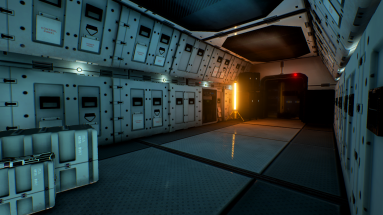 I have absolutely no idea what any of these things do, but I know that they’re somehow very important. 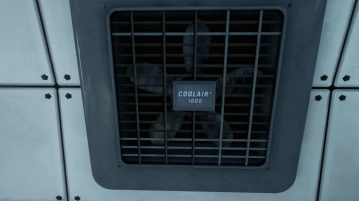 One thought on “The Turing Test Review”