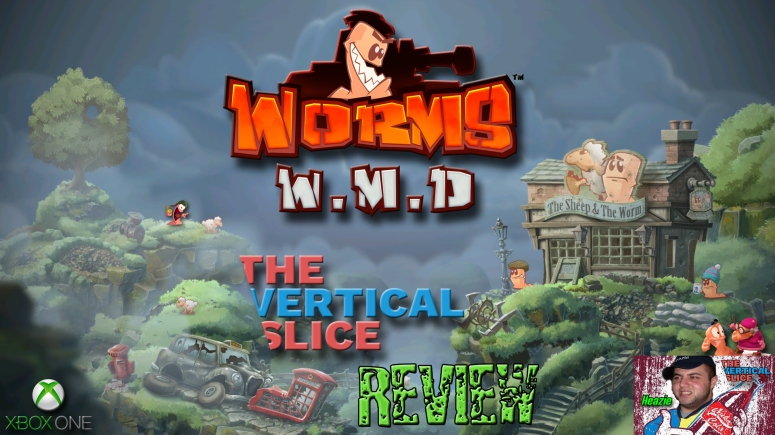 Man, tactical turn-based, war-style battles using worms just doesn’t get old to me.  It’s been a past time in my family for almost 15 years, and I wouldn’t be upset if it (and I) lasted at least 15 more.  I have fond memories battling it out with family members on Xbox and GameCube all the way up to today, and while the games may have changed here and there, the fun and excitement have always remained.  I’ll let you in on a little secret up front:  that still hasn’t changed.

If you don’t really know what the Worms franchise is all about, well, shame on you…  Just kidding (maybe)!!  Alright, so, Worms is basically as I described it –  you take a team of worms into a battlefield to have it out with another team of enemy worms.  Your arsenal runs the gamut from guns to grenades, to jetpacks, to silly things like an exploding sheep or a giant statue of a donkey.  As serious as war is, these little buggers still get in a few laughs here and there.  You move around the 2D map when it’s your turn and try to do as much damage to your enemy as you can, whether that be through direct punishment or through destroying the land around them.  It is war after all.

Over the years Worms has gone from a straight-up 2D computer animated look to 3D models on a 2D plane to 1st person and fully 3D.  Some could argue they didn’t always work out, some may think every style was fun and unique.  However, most would agree that the 2D Worms were the most loved and with this new game, we’re getting a little more Armageddon than the previous  latest Worms: Battlegrounds.  That’s A-OK with me.  Instead of bringing back the 3D models on a 2D plane we get some really beautiful hand-drawn 2D artwork.  It really does look great from either up close or far away.

The music is the same mellow and melodic Worms fare you’re used to if you’re a fan.  It can relax you if you’re winning just as much as annoy you when you’re getting trounced.  If you’re surrounded by Aztec temples, the music and ambient noise reflects that setting.  Team 17 has always done a good job making it feel fun while being relevant to the area.

When Worms W.M.D was going out on the rounds of getting the word out a bunch of new features were spoken about.  On paper, at least to me, I felt this would be a step in the wrong direction for the franchise.  After seeing some of them in action, I started to feel a little better but still didn’t think it was the right move for this game.  After seeing them in practice, and my practice at that, I can now firmly state definitively:  I was wrong.  The new additions offer a much cooler experience than I expected.  Here’s some of what you can expect going in:

Vehicles – You can now get into vehicles during a match, and not only are they super easy to do, but they offer both advantages and disadvantages alike.

Mounted Weapons – Machine guns, mortars, sniper rifles.  Just a few of the mounted machinery  that can lay waste to those around you.  As with the vehicles, they’re easy to use and offer both advantages and disadvantages.  Choose wisely!!

Buildings – Not to be confused with Forts that may or may not be Under Seige.  Throughout the maps there are buildings that you can take shelter in and potentially find crafting parts, health, or weapons to give you an advantage.  No one owns these buildings, so it’s first come, first serve – and they can be destroyed.  Because duh.

Crafting – Crafting items in games have been on the rise in popularity in recent years and Worms is getting in on the action.  This was the one I was most worried about, but after trying it out myself, I shouldn’t have been.  In fact, the biggest issue I have with it was that I keep forgetting it’s an option now.  It’s simple, has no drawbacks I can find, and can be done while you wait your turn.  You can even do it during your turn and it won’t count as your move.  You just wait for the item to be done on the next turn to use it.  Not only does this allow you to make important items that could be the deciding factor in the match, but it also introduces new variants to old favorites.  Variety is the spice of life, and you can add some more spice to your air strikes with some hot fire.  “You’re welcome.”*

The controls are as tight as ever, and judging by the interactions I’ve had with people in the room playing with me, if you mess up, you did it to yourself.  Jumping can still be a pain, but in the sense that the environment is out to get you, not the game.  Load times are quick and I never noticed any kind of major slowdown, even when things were getting hectic.  As far as I remember, W.M.D  was supposed to release earlier in the year, and if they spent time fine-tuning everything, it was well worth the wait.

While the game doesn’t feature a traditional single player story mode like its predecessor Battlegrounds did, there’s still a single player mode to tackle.  There are training missions, regular campaign objective missions, challenge missions, and even bonus scenarios to run through if you don’t have anyone around to play or just don’t feel like hopping online that day’s session.  And speaking of online, I had a really rough time getting a match in the time leading up to launch.  However, since midnight, I’ve been able to find people to play and can say that there has been zero lag in the many matches I’ve played and everything went very smoothly, aside from not being able to find more than 1 person to play at a time and that Ranked matches aren’t currently tracking your progress.  Hopefully, that will be fixed very soon.

Right now I’m going to rattle off some things I really enjoyed with the game.  The replay system they have is really cool and I’m glad it’s here.  The puns are everywhere and they can be glorious.  The voice over still has plenty of memorable lines and some of the goofier ones had my cousin busting his gut over and over (on the way to me busting his skull open with a baseball bat).  And we can still use dirty and vulgar names.  We don’t get censored.  Well, at least offline.  I don’t know what happens online.  I didn’t want to chance it, and as I said, it was impossible to find a match prior to launch, so my cousin’s NSFW team never stood a chance.

And, in keeping up with the fairness, here are some things that were nitpicks and annoyances for me.   The stats at the end of matches are no longer there (i.e. worst worm, best worm, most damage dealt, etc.).  That’s a huge bummer for me.  The unlockables aren’t that great, and even more as far as I can tell, if you didn’t/don’t get the Pre-Order All-Star pack, there are significantly less of them.  Sure, they are just cosmetic stuff, but we all know people love it.  Sometimes the text is way too small, even zoomed in, and lastly, you can’t speed up the AI’s turns.  It would be wonderful if that could be implemented down the line.

If you’re looking to boost your Achievement totals, there’s 29 in total and they run the board from lifetime stats to the number of levels completed to specific tasks needing to be done in a match.  Some could be difficult, but, as is the case in Worms, skill is just as prevalent as luck is.  If you’re a completionist, it shouldn’t be overly tough, because the most needed thing to have is time.

Here’s the bottom line, friends:  Worms is still a blast.  It’s still super fun.  I don’t want to be hyperbolic, but this is the Worms game long time fans have been looking for.  If you don’t consider yourself one of those, there’s still so much to love here it’s hard not to recommend it if you enjoy the style of strategy game this is.  For the fan, it’s a must buy.  For the casual observer, it’s something you should seriously look into buying.  You may just fall in love, too.  And no, I have no idea why the “D” is missing a period at the end in the title, but yes, it is driving me batshit crazy. 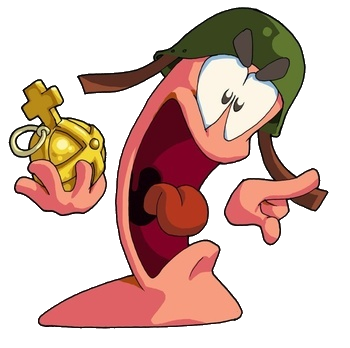 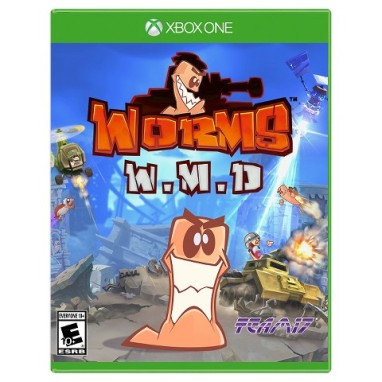 The 2D artwork is back, and I for one, am happy with that.

Excuse me, sir? Could you hold my bananas? MY EXPLODING BANANAS!! 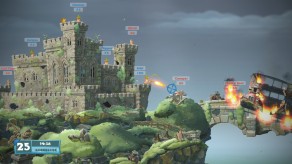 There are plenty of new additions to the series in this game. Luckily, they hold up their end of the deal.

These chaps are about to step out for some tacos. Fingers crossed there’s nothing dangerous going on outside today. Marco is really into tacos this month. 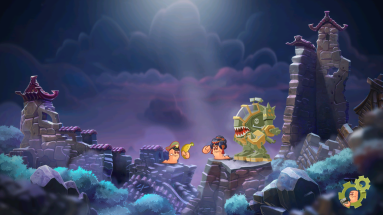 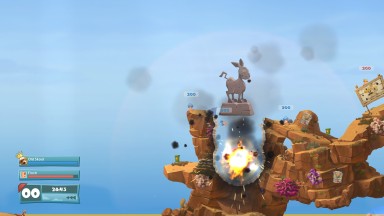 ​Sometimes you have to decide whether you want to fly that ‘copter or just hide like a wimp. I think it’s pretty obvious which one I chose.

*   I’m guessing this is something Team 17 is saying to us spiritually when we pull out a nice win because we chose to craft the Demon Strike instead of a normal Air Strike and it caused a wonderful chain reaction that took out the final 2 dudes who were blasting on you in a ranked match the whole game by dumping them in the water with near-full health while you’re nursing 10 HP and were just about ready to rage quit.