SHADWEN™ GETS 14 LEVELS IN HUGE FREE CONTENT UPDATE: ESCAPE FROM THE CASTLE

Finnish game developer Frozenbyte has released a free content update to their stealth game Shadwen in celebration of Frozenbyte’s 15 year anniversary in the games industry.

The update, called Escape from the Castle,  adds 14 re-worked levels completely for free on all PC, OS X and Linux platforms. The levels are reverse and remade versions of the ones in the original campaign – the objective now is to escape from the King’s Castle!

The difficulty curve in the new content has been increased and players are encouraged to search for hidden treasure maps scattered around the levels!

The update also includes numerous bug fixes and some tweaks to the game’s AI.

A showreel of Frozenbyte’s 15-year journey in the games industry is now available on YouTube:

In light of the anniversary, all of Frozenbyte’s games are also now part of a huge ongoing sale on Steam, GOG , Humble Store and Mac App Store,  with Shadwen available for -50% and other titles up to -85% off!

Shadwen is now also available on the Mac App Store, and the Escape from the Castle content is included.

Escape from the Castle Screenshots 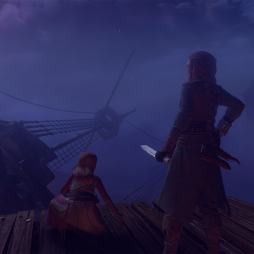 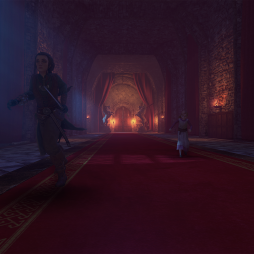 Shadwen is a stealth-action game where the only rule is to remain unseen. Stay hidden – or the ruthless guards will kill you on sight!

Shadwen, an assassin on a quest to kill the king, has a chance encounter with an orphaned girl, Lily. She follows Shadwen on her dangerous journey, but when the ruthless guards get too close, Shadwen must take action right in front of Lily’s eyes.

Will Shadwen risk the girl’s budding trust by resorting to violence, or try and find another way while keeping her real purpose concealed?

To kill or not to kill – that is the question.

The Launch Trailer (click here) showcases the game and its physics-based world and the emotional story.

It’s not often that developers return to games with DLC months after a game’s launch if the public was never aware of it coming.  It’s even rarer that the DLC offered is as substantial as this is.  And, it’s free.  How could you not be happy and applaud that?  The only unfortunate part is that it’s currently only available on PC or Mac, with no word on if it’s ever going to be available on PS4, which is a shame.  I hope it does eventually come to Sony’s machine, because I’m interested in seeing what was included.  I’d be even more interested if there were extra Trophies involved!!  Duh.

Here’s my review on Shadwen for PS4.  Enjoy!!