Just in time for Earth Day, Mighty Studios and Microsoft have given us a green little treat on our Xbox Ones.  You may have already been familiar with Skyling: Garden Defense, because this little indie title has been out on most mobile devices for almost a year now.  If you don’t know what this is, well, I can’t blame you.  So many games come out these days, BUT, I’ll try to catch you up here, because, if I do say so myself, this is a game worth having in your library somewhere.

The quaint story we get here is that the Skylings lived in lovely green gardens, but one day the Blight Monsters destroyed them and the Skylings were forced to flee their homes.  You play as young Bloom, and she’s the only one who stayed to fight off the monsters and take back her home.  Armed with magical growing abilities and some lazy cats, Bloom sets off to green-ify the sky world.

One of the first things you’ll notice from Skyling: Garden Defense is that the art style is very pixelated.  You can almost see every pixel on-screen, and many times that’s not a good sign, but here, whether done on purpose or by accident, it really makes the charming art direction that much more charming.  Bloom walks around like a cute little girl should, moving from square to square, bringing the green everywhere she can.  The goal is to make every square panel full of grass and plants, and once complete, to reach the end square untouched and move on to the next stage of her home renovations.  It’s super simple.  It’s very much like Q*bert, but with a cute little girl as the protagonist, grass, and balloons.  Oh, and cats.  Lazy, sleepy, purring cats.  Plus, it has a limited, but neat rhyming story.  Sometimes this trope feels awkward or too “try-hard-ish”, but not here.  It works wicked well.

We don’t see too many maze-puzzle games these days, and if we do, well, I certainly have missed them being right in front of me.  That’s one more reason this game stands out, aside from the general look.  Classic puzzle game play is always a good time.  Put a new shine on it and you have a new toy to play with.

Don’t go thinking that everything is a walk in the park, as if the Blights just ruined your land and walked away.  You’d be wrong.  They stuck around and impede you on every level.  Some of them can only move on certain squares while others can move anywhere.  There are more, but you should discover them for yourself.  The Sluggies, on the other hand, while being able to move anywhere, where ever they move, they eat up the grass you’ve put down.  These guys are probably the biggest menace to your progress.  However, while they’re dangerous to you, they’re also dangerous to the monsters, too.  If you can grab them from behind, you can use them as a weapon to take one (or more) out with a well timed toss.

Besides using your quick-fingered movements and Sluggies, you can also pick up cats and use them as a wall.  For some weird reason, the monsters are afraid of these little purr-balls, and even weirder, the cats don’t even seem to care they’re being woken up, tossed around, and bumped into by monsters.  Bonus for us!!

In each level there are also dead-looking garden plots with fruit trees.  If you’re able to completely encase one with greenery, you’ll grow them back and have fruit drop for you to collect.  Don’t let them sit for too long, though, because they do eventually rot.  Collecting these will boost your score, and along with that will raise your chances for grabbing the ever popular 3 star rating at the end of the level.  You also get timed during the level, so collecting fruit and the time element – these are areas rife with replay-ability.  And, if you get stuck, after the first 3 levels, you’re able to select any of the 30 to play.  You aren’t restricted to playing chronologically.  A welcomed and nice touch.

As far as controlling the game, it’s quite simple, and if you’re familiar with Q*bert, you’re familiar here.  The controls do take some time to get used to, but once you do, knowing the intricacies of just how you’ll move when you push a direction (I recommend using the d-pad, but that’s up to you), you’ll feel confident with the repetition.  And you need to get confident, because, well, this game is so much harder than you think it will be.  It looks cute, and it is.  It looks simple, but it’s not.  Getting the movements of the enemies down is easy at first, but once they start throwing multiple kinds at you in the same level, well, all bets are off.

When these Blights interact with each other, it throws everything askew.  Your initial plan of attack from the first few seconds goes out the window once they start bumping each other around.  And even worse?  When you mess up?  It’s probably your fault.  I know, this sounds weird, and it definitely feels like it when I’m saying it, but every single time I died, while getting incredibly frustrated, I couldn’t help but think – it was all my fault.  I never once looked at what happened and blamed the game.  It always felt like my screw up.  I was too careless.  I tried to be too slick with the quickness.  I thought I could outrun or outmaneuver an enemy.  Nope.  But it was me who caused it.  More often than not, you can typically find a spot to let things reset or help you take a moment to access.  When you try to get cute with the game, you pay for it.  Especially if you’re trying to get a better score or time.  You get tempted to chance it.  Don’t chance it.  Not on your first try, anyway.  Trust me.  Every time I died, screaming and punching invisible walls in front of me, I never wanted to give up, either.  Again, the mark of a good puzzler. 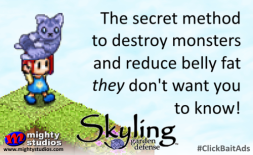 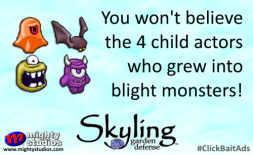 And, for all us Achievement fans, the 13 here don’t seem too difficult to get.  Most are just from doing things you’d do anyway.  As always, I’d love there to be more than 13, but, with this game’s difficulty, they may not be a slam dunk immediately.  I accept the challenge.

This game is wonderful.  As I said earlier, this is a game that should be in your gaming library.  If you even slightly like puzzle games, you can’t pass this up.  The price alone should be an incentive.  Fun is always the name of the game, and in this game, in my brash opinion, fun is without a doubt everywhere.  Go buy this game.  I won’t say it twice.

Skyling: Garden Defense is available now on Xbox One for $4.99.  You can also find it on the Windows Store, iOS, and Android for $1.99.  It’s also on OUYA, though I’m not sure the price.  I couldn’t find it listed online.  A code was provided by Mighty Studios for the purpose of this review.

One thought on “Skyling: Garden Defense Review (Xbox One)”