I love soda.  Like, LOVE love soda.  True, I don’t drink anywhere near as much as I used to, but absence makes the heart grow fonder, right?  I think I heard that somewhere before.  Probably on a commercial, or a sky sign ad, or even a matchbox.  The point I’m trying to make is, I love the damn drink.  And since I don’t really imbibe much anymore, pretending to drink soda via Soda Drinker Pro on my favorite gaming console is sure to make me feel great.  Right?  RIGHT?!

Wrong.  As the original FPS (First Person Soda – self dubbed), it’s not easy to judge this on other  games available for your hard-earned cash.  Nothing close to really compare and contrast, anyway.  There’s just not much similar to use as a barometer.  Now, I said it wasn’t easy, not impossible.  Since we can’t really use other games to compare, we can certainly use our own gaming sensibilities and knowledge of what makes a good/fun game, and hash out the results for this.  And hash out I shall.

When you first boot Soda Drinker Pro up, there’s not much to look at.  I mean that both literally and artistically.  Now, this doesn’t always have to equate to “bad” right out of the gate, and sometimes, simplicity is a great thing.  Moving on, you navigate the menus and notice there still isn’t much there.  Hmmm…  OK, no worries.  On to the game.  ON TO DRINKING SODA!!  In total, there are 102 levels of soda drinking to grind through.  Yes, grind.  In truth, you can beat every level within a minute, however, it’s still a grind.  By the 10th level, you’ll feel just how much of a slog it is.  But, I’m getting ahead of myself.  As you’d expect from the “FPS” standards, all you see is a cup of soda.  Hold a button and raise the cup.  Hold another to drink.  Rinse.  Repeat.  For 102 levels.  This wouldn’t be an issue if there was something to do in these levels.  There isn’t.  You may think there is, and the game may trick you into thinking there is, but short of a handful of levels having hidden Achievements, nope, you do nothing.  This isn’t entirely true, because you can collect bonus sodas (also the name of a real life soda drink), but, with how slow and agonizing you move inside each tiny level box, after a few, you may start asking yourself why would you even bother.  After you beat the game, and just when you think you’ve finally ended this battle, you also get Bonus Levels.  Luckily, you don’t need to do those.  You can use a “Customization” menu to change how your soda is on he main menu, which as far as I can tell helps you move a tad faster and gives you a little hop, but even with that, you move so slowly and awkwardly that you rarely want to move at all.

Graphically, these levels are a major dud.  Which, admittedly was done on purpose for this mode, but, still, with how annoying everything looks (a word which may come up often in this review now that I really think about it), you have to wonder if it was the right choice.  They look like something a child put together after learning about level design in 3rd grade.  This may have turned out charming, if what the levels and graphics framed was a good time.  Nope.

Alright, so, I have to move on to the real game here, because, as you probably figured out, the soda drinking stuff is a joke.  The real game here is the mode called “Vivian Clark”.  You access this by finding a secret entrance somewhere in the soda levels.  It’s really easy to find, and I accidentally found it on my own. I was told about how to find it in advance, but I had completely let that slip my mind and still found it with no trouble, so, I’ll let you figure that out yourself.  I’m sure every other review out there will tell you how, but, you need some kind of accomplished feeling playing this should you choose to do so.  This is my gift to you.

In Vivian Clark you start off as a rain drop falling from the sky and your goal is to collect floating… things…  I have no idea what they are called, and if the game told me, I blocked it out.  When you drop in, you aren’t given any instructions.  Keep that in mind, because this is pretty much how the rest of the game goes.  The whole mode is pretty much Nintendo’s WarioWare, but a WarioWare that was created by someone on hardcore drugs, much less fun, and even less direction.  With the collected “things” you can buy items to help you out.  Logs to keep the fire going, turtles with a straw to go back to what you just played, and clocks to extend time.  You can also purchase guidebooks, and besides having ties to the Achievements, these books also give you a glimpse on how to play the minigames.  I say a glimpse, because even after buying some, I still had no idea what I was doing most of the time.

These games range anywhere from floating up to space, shooting things with your ship, running on a 2D plane, and hopping around in 3D.  Every time you are tasked with collecting.  That’s the game play loop.  Collect just enough so you can buy the items, but most importantly, the books, and keep doing it.  Oh, and try not to die or let your fire run out, otherwise you have to start over.  You still keep what you’ve purchased, but you have to start collecting again from scratch.  It sucks.   Not just because you lose everything, but because nothing is fun.  This mode is exactly the kind of game I’m into, just look at my gaming history for proof, except here, nothing is fun.  The graphics at times COULD be charming, but they’re so mish-mashed and odd that it just doesn’t work.  Anywhere.  And while on that frustrating and annoying game play loop?  The controls will be not something you will enjoy, either.  Everything is too floaty.  Likely on purpose, but that purpose was the wrong move (if there is even a right one).  The controls make this game the asteroid and your fun and enjoyment are the dinosaurs.  Mix them together, and I think you know what you get. If not, read a book once in a while.

The music throughout is varied and good.  Good, in an annoying kind of way.  The kind of way that I knew I appreciated what I was listening to, but, for some reason, even though I liked it, I wanted to turn it off.  I don’t know if what I’m saying even makes sense, but I truly believe what I’m saying, whatever the end result.  It almost felt like the music was higher than it should be in volume, and no matter how low I turned my TV volume to, the sound just, struck that “needle in the brain” chord.  Again, I actually did like much of the music, it’s just listening to it for more than a few minutes at a time made my tiny brain hurt.  The voice overs throughout the levels are kind of funny, but at the rate in which they repeat in a level – should you decide to explore and not just immediately gulp your drink down to get to the next – eventually hurts the humor you get.

A side note I just want to point out before I forget is that you can also use Kinect for the soda drinking.  I did so only for a few levels, and while it worked fine, I just couldn’t subject myself to any more, so I had to stop.  Maybe if I had done this from the start I would have used this control scheme more, but, I had already bloated myself enough after 102 levels, I couldn’t drink any more.  Take that for what you will.

I didn’t put as much time as I would have normally (or liked to) put into a game that I am privileged and tasked to review.  It’s just, this game, was much more of a chore than an experience I was having fun with.  I drink soda because it’s delicious.  I play games to relax and unwind; because they’re fun.  This is neither of those things, obvious joke to the former included or excluded to your own personal tastes.  And because I take everything I am afforded seriously when getting a wonderful opportunity to review a game, I can’t sugar coat things.  That would be wrong, and besides, I couldn’t.  It’s just not who I am.  Ask those close to me, I’m sure they can give you the horror stories of me speaking my mind or sticking to principles that in the end hurt me.

You may have noticed that this review is all over the place.  For that, I’m sorry.  It was really difficult formulating coherent thoughts about this experience that didn’t just equate to sad noises and screams.  I’ve rambled on long enough, and some may argue (rightly so), for too long as it is.  As much as I would have LOVED to enjoy this game, or believe the game is a good one, even if I personally didn’t see it, I can’t do either.  I would love to see the creator Will Briely and Snowrunner Productions try something else.  Anything else.  I’d love to see what they can do in the gaming space by actually trying (I’m being a little facetious here, so I hope you get the overall point).  I understand this game took many, many years to create, a lot of heart and soul went into it (along with the ending I’ll likely never see), but I’ve had my fill.  I’m sure there’s someone out there who will enjoy this game.  That said, I just have absolutely no idea who that special individual is.  If that’s you, I honestly envy you. 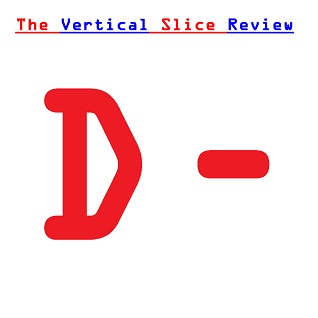 Soda Drinker Pro is available now on Xbox One and Steam for $9.99.  A code was provided by the creator for the purpose of this review.