Quantum Break is a game I have been waiting on for a very long time. 3 years, almost. Since the Xbox One reveal in May of 2013, that was the one game I wanted to buy right that second. The game that would make me go all-in on the Xbox One, $500 price point, DRM, Kinect inclusion and all. I mean, these were the same people who created my favorite video game of all time, Alan Wake. This had to be good, right? At the time, and even to this day, Quantum Break is way ahead of its time.

If you take nothing else away from my review, remember this: Quantum Break exceeded my expectations on every level, and is currently taking the top spot in my Game of the Year 2016 list, or whatever we end up calling it. It’s just that good, as Littlefinger would say.

Quantum Break tells the story of Jack Joyce, trying to stop Paul Serene, whom he considers to be a close friend, but he’s also the head of Monarch Solutions, who’s main mission is to enforce the End of Time. Very clearly influenced by things like Back to the Future and other time-travel stories that I won’t mention here for fear of spoiling the entirety of the story, director Sam Lake really lets the consequences of time travel shine through in every aspect of the game.

Although, I would’ve liked to see the story go even farther down the rabbit hole than it did, but I completely understand why it didn’t. Time travel is very complicated and introducing another main story on top of what’s already here would’ve been torture, and it might’ve been worse for the wear, if Remedy went all-out. See, this is what I like about Remedy’s writing team. They know when enough is enough and when to truly go all-out.

Even on top of that, I have to commend everyone involved in the making of the Quantum Break TV show. Consisting of four twenty-two minute episodes, Remedy actually pulls off a completely different sub-story that takes place concurrent to the main game, but all the while doesn’t rely too heavily on being completely divorced from it at the same time. Yes, they intersect, as Paul Serene is a very big part of the story, because he’s the one driving the story in a similar way to how Jack drives a very big part of the main game’s story. However, in these sections, we get to know more about Liam Burke, Charlie Wincott, and Fiona Miller, and this is where I get very nit picky. I love the fact that Paul is ever present in the TV show, but looking back on it, I would’ve loved to get more of Liam and what he’s going through, since we already know a lot about Paul through the main game anyways.

The performances of the case of Quantum Break, TV show or the game, are quite astoundingly well-done. You’ve got Aiden Gillen as Paul Serene, Lance Reddick as Martin Hatch, Marshall Alman as Charlie Wincott, and well…you get the idea. Microsoft Studios really took the time with Remedy to make sure that this was the best game and the best TV show it could possibly be. At times, I wanted more of these little bite-sized episodes, but that would in turn extend the game, which I think would’ve been a bad move.

So, let’s finally talk about the game now, shall we? The game, structure-wise, is very easy to play at your own pace, as the game has Acts, and Junctions. To test out how truly easy going you could go with idea such as this, I decided that I’d play an Act a day, and then leave each Junction, which is the TV show, as my introduction to Quantum Break when I came back the next day. Well, I’m happy to report that it works at any pace imaginable. Although, I would recommend something similar, as the story gets quite confusing. Either way, if it ain’t broke, don’t fix it. It worked in Alan Wake, and it works here too.

What’s a Remedy game without a bit of a story? Well, in this case, a damn fine shooter, if I do say so myself. The story is very simple and clear cut, getting more complicated with each firefight, narrative object, or even in a new setting. Never once did I sit back on my futon, and say “I’m just not feeling this.” In fact, I really, really dug the story, because it’s doing something new, with a sense of familiarity.

Also, I’d be remiss if I didn’t talk about the graphics, which did bring about a bit of controversy. Basically, Quantum Break runs at 720p, making the game appear “soft”, creating a cinematic looking game. The game likes to switch quality levels, so you may find some scenes looking a bit rough, but never downright terrible.  So, when you’re shooting things and bullets ricochet, things look great. When you see a close up of facial animations, not so much, almost like there’s a bit of motion blur being applied as they’re talking, which would be nice, but I’m not watching The Flash, so the characters have no reason to have their jawlines vibrate. 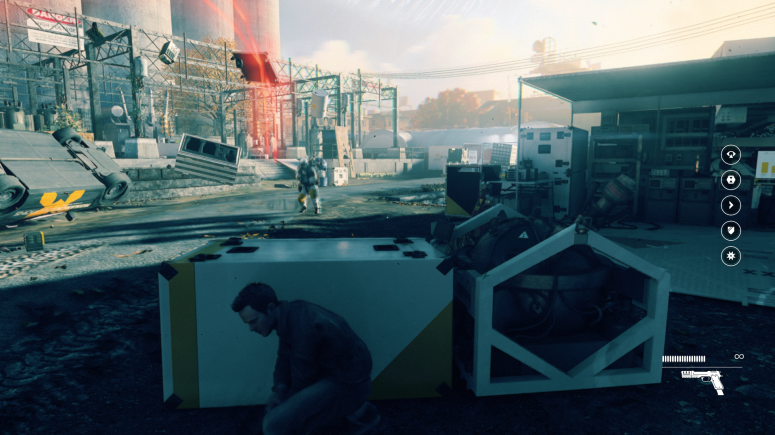 Oh, and the game play is just phenomenal. Quantum Break totally justifies the shooter mechanics, because big bad dudes with big bad guns are coming to kill him. I took issue with the mechanic when it came to Alan Wake, because it’s not like The Dark Presence was coming at Alan with hand grenades. Also, they make the gun play actually quite enjoyable, with help from some time powers, which will have you actually moving around more than you would in say Titanfall or Black Ops III. In those games, you just jump on walls and shoot big dumb robots.

In Quantum Break, you’re zipping around the battlefield, stopping time, creating a shield to recover health inside of, or just simply play it like a Tom Clancy game. You never want to be in the same place for too long, as environments can become compromised if an enemy shoots at it long enough. Enemies like the Striker especially enforce this rule, considering their ability to move outside time and zip around the battlefield, just like you can. Now, later in the game, they’re not much of a problem, thanks to a nifty new time power, but early on, with them whipping around, it’s easy to get killed, if you’re not paying attention to your surroundings. Furthermore, in any situation, if you’re not paying attention to the enemy’s location, you will die. The firefights are like puzzles, in a way. You have to understand if you can pop off a few shots before the next guy fires at you, or if it would be just much simple to stop time around him, and just pump the guy full of lead. If you want to use the environment as well, go right ahead, but aside from some Chronon canisters later on, those don’t really do much.

The game does have some platforming, but it’s not anything to write home about. Think Uncharted mixed with time manipulation and you have Quantum Break. Climbable objects are very clearly marked with a colorful tarp. Like I mentioned previously, there are some sections of the game where you have to manipulate time to get to the next part. It’s not too often that you get sick and tired of it, but it does happen more often than one might think. The moment-to-moment of this is honestly just holding down Y and looking for a solution. In the later sections, time is doing all that on its own, further complicating things, which I quite enjoyed. Either way, I honestly forgot these sections were even a part of the game, as their primary function was to slow down the pace of the game and provide the story with the breathing room it so needed.

This degree of player freedom makes it my favorite science fiction shooter on the market, even surpassing Mass Effect. It actually draws some inspirations, in that regard, now that I think about it. See, you can upgrade each one of your time powers using Chronon particles, which I could get into, but yet again, spoilers. This creates an incentive for the player to take their time, wander through every nook and cranny of this lovingly crafted town of Riverport, Massachusetts.

Quantum Break is a masterpiece, marrying video game and show in holy matrimony, while never being too dependent on the other, while also creating some of the best story moments and action set pieces I’ve seen in a long time, that I tried not to spoil in my review, whereas I’ve seen other people spoil them, but this is definitely going to be a game to remember for years to come. 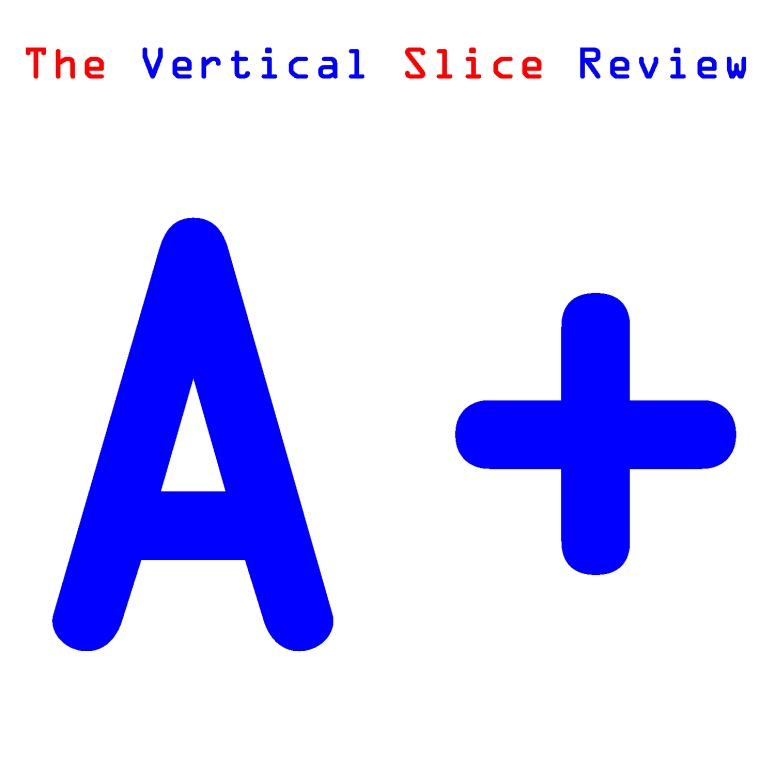