This is not the Star Wars game you’re looking for.

I’m on Hoth. Snow is getting in my boots and blaster fire surrounds me at every turn. An AT-AT is towering over me, laying waste to the Rebel scum that lay at its feet. A-Wings and TIEs desperately battle for control of the skies, engaging in dogfight after dogfight. I see something out of the corner of my eye. Could it be? It is. Luke Skywalker is running straight for me, lightsaber and all. Do I have time to make a break for it? Sadly, no. I stand my ground, but it isn’t enough. I’m dead before I can even think twice about what just happened. 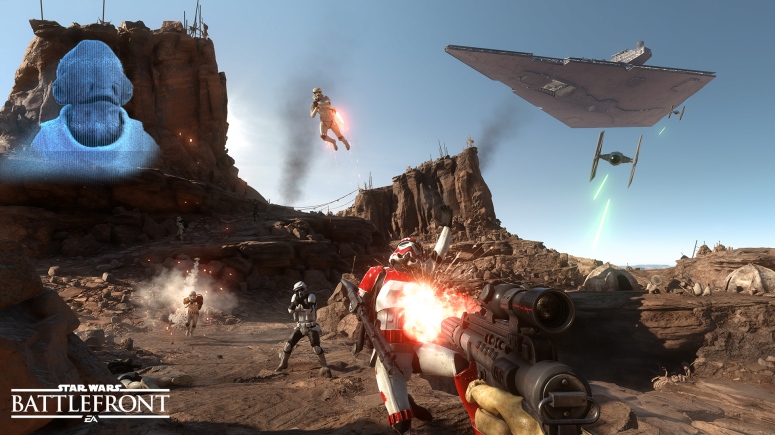 Star Wars Battlefront, to a large degree, is all about you making these cool “watercooler moments”. The action is intense, visceral and most of the time, completely out of your control. With this, DICE has created the most authentic Star Wars original trilogy experience to date.

However, the thrill simply fades away after each and every hour you spend in Star Wars Battlefront. Within the first hour, I had seen all I really needed to see. There’s just not a whole lot of content in the game. DICE has had an awesome history with Battlefield‘s Multiplayer aspect, so I kind of expected more maps, weapons, and a larger sense of progression. Instead, you feel like you are constantly grinding, but you don’t know what for.

Star Wars Battlefront is a multiplayer shooter, through and through. Battlefront offers nine modes, from 8-player firefights to 40-player wars. Each way you play provides you with just four maps set in Hoth, Endor, Tatooine and Sullust. The best way to play this game is honestly to just jump straight into the 40-player Supremacy or Walker Assault, where 2 big, dumb AT-ATs are attacking a Rebel base and you have to attack these big things or defend them, depending on whether you are a Rebel or Imperial. The other modes just really pale in comparison to the aforementioned modes. They’re fun, but ultimately uninteresting.

The game flows brilliantly, but brings on the the big spawn point problem that plagues modern shooters. More times than I can count, I’d get thrown right into the heart of battle and die almost immediately. You get a small radar-like indicator to tell you where the enemies are, but it’s just not enough.

The maps are well designed, allowing you to play the game in the way you want. Wanna take a speeder through Endor? Go right ahead. Want to take to the skies? Go right ahead. DICE has expertly taken their Battlefield knowledge and applied it to the skies and the ground troops. If you want to survive in Battlefront, you’ll need to be like a surgeon in the field. However, the Heroes/Villians need some work. They feel overpowered and are hard to take down. I know that’s the point, but there is a line that needs to be drawn here. These Heroes/Villains can be powerful, but they also need to be a challenge and not a nuisance.

Some of my favorite multiplayer moments have been from Star Wars Battlefront, new and old. Nothing beats the rush you get when you take down Luke Skywalker or Darth Vader, or even just beating a Stormtrooper in close-quarters combat. 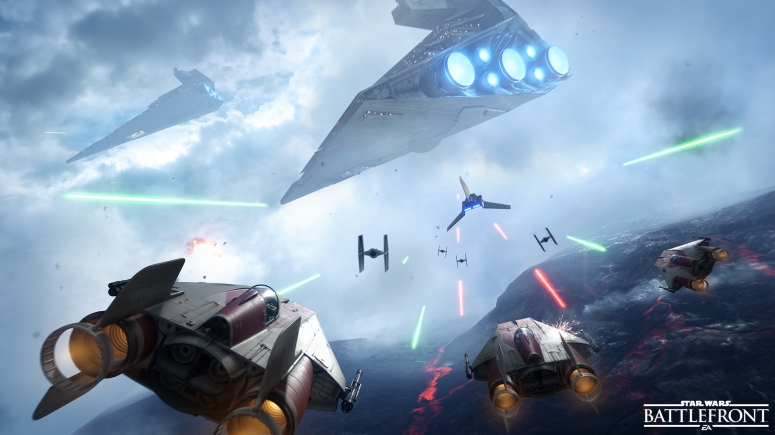 As fun as this is, they simply aren’t enough to get a good sense of progression throughout the hours you play. My blaster, which just so happens to be Han Solo’s blaster, I never really felt a need to equip another blaster. Sure, I could fire faster with a DLT-14, but if you’re good enough at shooters, that doesn’t matter all that much. The other weapons (of which there are 16) simply aren’t as satisfying to shoot, and the ones that really can put a dent in the enemies are hampered by a cool down meter. When you get into character customization, it gets even worse. Yeah, you can change your look, but it doesn’t even matter most of the time. Well, unless you’re playing in third-person. The only thing that really changes how the game actually plays from moment-to-moment is the jump pack, and that’s a big problem.

Star Wars Battlefront is a game for the casual shooter fan. No one ever planned an attack, no one ever talked. So, if you’re going into this game expecting a Star Wars skin on Battlefield, expect to be dissapointed, as there is no aspect of team play in this game. While I like a game I can just hop into every few months, I expected more from a franchise that I basically grew up with.